Once an Heiress Deleted Scene, Dinner with the Bachmans

I thought I'd share with you a scene deleted from the final edit of Once an Heiress. If you haven't read the novel yet -- stop! Go read it and then come back. I promise this scene will be here later.

The rest of you, meet me behind the jump for some bonus goodness.

This scene originally came at the end of what is now chapter twelve, in which Ethan suffers the fallout from the fiasco at Covent Gardens. He's dragged into Mr. Bachman's office, where he's maneuvered into signing the marriage contract, then makes an attempt at proposing to Lily. I wrote this scene from the point of view of Lily's father. It takes place during the family dinner to which Ethan had been invited. Mrs. Bachman, you may recall, is suffering back problems, while Lily and Ethan are both upset about their engagement. In the end, the scene didn't contribute to the overall story enough to make the final cut, but I enjoy seeing the couple through Mr. Bachman's eyes. I hope you will, too.

Alfred Bachman settled his wife into her chair, lending support with a hand twined tightly around hers. She hissed as she sank to the seat. A lump in his chest constricted at her distress. Through the many years of their marriage, he'd always done his best to provide Mrs. Bachman with comfort and stability. The only burdens he'd not been able to take upon himself had come from her own body. There were the babes she'd lost in the early years of their union, leaving him with such a dreadful feeling of powerlessness as he witnessed the pain and grief the losses wreaked upon her. And now as they sailed toward their twilight years together, the agonizing muscle spasms in her weakening back appeared—a dragon whose torment he could only witness with frustration, unslayable with his impotent weapons of warm compresses, physics, and laudanum.
His face drew into a grave frown. “Are you sure, my dear?” he murmured in her ear. “I'll help you back to bed—”
She turned her face up to him, a glassy look to her eyes brought on by the half-dose of laudanum she'd ingested to take the edge off the pain. “No, Mr. Bachman, I'm quite all right.” She grinned sleepily; her eyes slid across the table where Lord Thorburn held the chair for Lily.
As they watched, their daughter paid her new fiancé no more notice than she would a footman, no word of thanks for the man's courtesy. Thorburn's lips tightened. He shoved the chair into place, hitting the backs of her legs. Lily startled as she collapsed to the seat with a graceless plop. Her eyes shot daggers at the smirking viscount.
Alfred shook his head and sighed. His wife sniffled. “I'm so happy, Mr. Bachman. Just think—our Lily will be a countess someday!”
He patted her shoulder. “If they don't kill each other first,” he grumbled.
The meal progressed in tense silence. Lily ate with mechanical efficiency, finishing her mock turtle soup well ahead of the others. Lord Thorburn attempted an air of congeniality, but it failed to spread around the party. Mrs. Bachman produced little moans of enjoyment at every bite, which in turn elicited Lily's visible annoyance.
Alfred watched as Thorburn studied Lily's pursed lips and narrowed eyes. Then the younger gentleman addressed Mrs. Bachman. “My compliments, madam. The soup is of the first order. Truly, I can't say I've ever had better.”
Mrs. Bachman preened at the nobleman's compliment, the laudanum augmenting her typical manner of deference to the titled class. She does try, bless her, Alfred thought. Without the benefit of the etiquette lessons Lily had been privileged to have growing up, Mrs. Bachman did the best she could to ingratiate herself with the ton, trying to act as a proper society wife and hostess.
“Oh, my dear, dear Lord Thorburn!” she proclaimed. “How good of you to condescend to notice our humble mock turtle.”
The viscount's eyebrows rose in amusement. Lily groaned.
“Cook does do justice by most soups,” Mrs. Bachman continued, “but she has a tendency to produce rather dry cutlets. I have advised her to cover this deficiency with sauces, but it continues to be a source of disappointment to me. I fear that by the time our guests have got through the cutlet, they've quite forgotten the excellent soup which began the meal.”
As she prattled on, Lily drew her lips in and squeezed her eyes shut for a moment. Then she drew a deep breath and pasted a false smile on her face. Alfred winced inwardly—he'd almost rather Lily be forthright about finding her mother objectionable than give such a poor imitation of agreeableness.
Mrs. Bachman tilted her head to the side and almost toppled out of her seat. Alfred instinctively lunged, but he was too far away. The footman hovering behind her snatched her arms and righted her. Alfred blew out his cheeks and sat down again. Mrs. Bachman continued on as though she didn't notice her own near-disaster. “Tell me, my lord, does your cook create a good cutlet? If so, I should be much obliged if I could impose upon her to give ours some advise in the matter.”
Lord Thorburn's jaw worked soundlessly for a moment. He, too, had reached out when she'd begun to go over, and now blinked, trying to reorient himself in the conversation. “Ah, no, ma'am, I'm afraid I do not employ a cook at present.”
Mrs. Bachman tsked. “Oh, but you are a bachelor. I suppose you dine at the club and make a nuisance of yourself at your married friends' tables.”
Lily shot Alfred an anguished look. He cleared his throat meaningfully, hoping his wife would cease talking. Perhaps allowing Mrs. Bachman to come down for supper had not been the wisest course of action, he reflected.
Thorburn, however, took her comment in stride. “Just so, Mrs. Bachman. I am blessed with a circle of acquaintance which kindly keeps me fed.”
“You must have a cook, now that you are to wed.” Mrs. Bachman's chin trembled as she looked from Thorburn to Lily, her eyes shining beatifically.
Lily stiffened and fixed her gaze on her plate. Thorburn cast her a sidelong look before returning his attention to the older woman. “For now, I'm afraid such an expense will have to wait. You may have heard that I am presently economizing.”
Alfred watched as his beautiful, proud daughter seemed to collapse in on herself, her shoulders slumping. His heart lurched on her behalf. He'd heard from Wickenworth about the state of Thorburn's house—all the furniture seized and sorry drifts of dust all over. It pained him to force Lily's hand in the matter, but he had no choice. She had to marry the man, and now she was to be mistress of an empty, shabby house without so much as a cook in the kitchen. 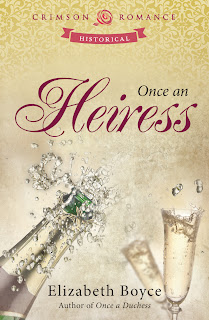 He sighed. The wedding might be unavoidable, but perhaps he could help the children a little. He couldn't very well send Lily out into the world with nothing but the clothes on her back.
When the meal adjourned, the gentlemen did not linger long over their port. They soon rejoined the ladies in the parlor, only to find Mrs. Bachman with her head tipped back on the sofa, snoring softly. Lily stared out the window.
Alfred sat next to his wife and took her hand. She stirred a little; her head flopped forward, her chin coming to rest on her expansive bosom.
Thorburn crossed and stood behind Lily. He hovered on his toes, poised uncertainly. Go on and talk to her, Alfred silently urged. Time and again, he'd seen Lily's suitors fall in defeat for simple lack of intelligent conversation. Her mind craved constant stimulation.
He supposed that was his doing—what with his insisting on her having tutors in rigorous mathematics, philosophy, languages, and classic literature. In retrospect, perhaps that hadn't been entirely well done, but neither could he regret it. He would only regret having allowed her intelligence go to waste.
In any event, poor Thorburn didn't stand a chance if he didn't hurry up and open his mouth. He knew enough of the man to believe him capable of engaging her intellect. He seemed to be of a good humor, what with not taking offense at Mrs. Bachman's outrageous comments at dinner.
“It's too bad Mrs. Bachman has nodded off,” Thorburn finally said. “We could have played whist.”
Alfred shook his head. Bad start.
Lily turned from the window and crossed her arms. “Whist, my lord? I am given to understand your habitual game play has landed you in the mess you're in—the same mess into which I have now been dragged.”
Thorburn glanced in his direction before responding. Watching your words in front of the old man, eh?
“I merely suggest it as a way to pass the time,” Thorburn said. “I was not about to suggest any kind of stakes beyond shillings.”
“Why?” Lily shot. “So you can go further into debt? You'd undoubtedly lose every shilling in your pocket and then some.”
“Very well,” Thorburn rejoined, visibly struggling to maintain his equanimity. “What do you suggest? Would you like to play the pianoforte for us?”
Alfred winced. Lily's miserable performance at pianoforte lessons had been a constant source of embarrassment for her as a girl, to the point where Alfred had allowed her to give up the instrument altogether. Thorburn was doing a fine job of stumbling across every point of conversation sure to vex her.
Lily uncrossed her ams and planted her fists on her hips. “So now I'm to entertain you? Is that it? What shall I do next, my lord? Would you like to grind an organ while I put on a little hat and caper around the room?”
Thorburn snorted. “The idea hadn't occurred to me, but it would be diverting. Shall we ring for your little hat?”
While Lily and Thorburn flung barbs at one another, Alfred settled back to watch the fur fly, noting with satisfaction that the fire had returned to his daughter's eyes. Most of her suitors she dismissed out of hand, with a sneer and an offhand remark. This one got under her skin and fought back when she pushed.
A smile flitted across his lips as he leaned to whisper to his wife in her laudanum nap. “I think it's all going to work out, my dear.” Lily stomped her foot at something Thorburn said. Alfred chuckled. “I think it's all going to work out just fine.”
Posted by Unknown at 2:06 PM

Email ThisBlogThis!Share to TwitterShare to FacebookShare to Pinterest
Labels: deleted scene, Once an Heiress, Regency Romance